Much of the material on causality is taken from the wonderful book by Hardt and Recht.

For fairness, a central source was the book in preparation by Barocas, Hardt, and Narayanan as well as the related NeurIPS 2017 tutorial, and other papers mentioned below.

We may have heard that “correlation does not imply causation”. How can we mathematically represent this statement, and furthermore differentiate the two rigorously?

. To represent causation, we change the second part of the formula:

if intervening to change

changes the probability of

Suppose we have the random variables

(taken over choice of a random person), which represent eXercising, being overWeight and having Heart disease, respectively. We put forth the following (hypothetical! this is not medical advice!) scenarios for their relationships:

and the heart disease indicator

So, in this scenario, exercise prevents heart disease and being overweight, while if we don’t exercise, we may be overweight or suffer from heart disease with probability 1/2 independently..

in the same rule in the previous scenario. So, in this scenario, people are naturally prone to being overweight with probability 1/4, and being overweight makes you less likely to exercise, rather than the causal relation being in the other way around. As before, exercise prevents heart disease, and someone who did not exercise will get heart disease with probability 1/2.

We find that in scenario 1,

In fact, as this table shows, the probabilities for all combinations of

are identical in the two scenarios!

Now, consider the intervention of setting

, i.e. stop exercising. That is, we change the generating model for

tells us nothing about

now so we get

. Now that we added in an intervention, the two scenarios are different!

This is an example of why correlations are not causations: while the conditional probabilities

identical in the two scenarios, the causal probabilities are diffent

Consider Scenario 1, where the causal structure is as follows:

Looking at the table above, we see that the unconditional probability

. Since in this scenario, there is no causal relation between being overweight and suffering from heat disease, the causal probability

is also equal to

However, we can calculate the conditional probability from the table and see that

The reason is for this gap is that there is a counfounding variable, namely

that is a common cause of both

are confounded if there are values

To fix the effect of a confounder, we condition on

. It also allows us to find the probability of an intervention. The general deconfounding formula is

ranges over all the immediate causes of

Using the deconfounding formula (★) requires (a) knowing the causal graph, and (b) observing the confounders. If we get this wrong and control for the wrong confounders we can get the causal probabilities wrong, as demonstrated by the following example.

One way to describe causality theory is that it aims to clarify the situations under which correlation does in fact equal causation (i.e., the conditional probabilities are equal to the causal probabilities), and how (by appropriately controlling for confounders) we can get to such a situation.

such that each occurs independently with probability

. We assume each will send you to the hospital (variable

) and those are the only reason to arrive at the hospital.

If you control for

(i.e look at only people who went to the hospital), we find that the probabilities are now correlated: A priori the probability is

This relates to the joke “the probability of having 2 bombs on a plane is very low, so if I bring a bomb then it is very unlikely that there will be another bomb.”

In general, the causal graph can look as one of the following shapes:

is a fork then controlling for

can tease out the causal relation. If

is a mediator or collider then controlling for

are two random variables, we say that there is a “backdoor path” from

if there is direct ancestor

We can show the following theorem:

Theorem: If there is no backdoor path then

Here is a “proof by picture”:

If there isn’t a backdoor path, we sort the graph in topological order, so that all the events that happen before

are not connected to

. So we can first generate all the variables

. Then the probability distribution of the events

only depends on the value

is generated from some probability distribution that only depends on

When we design experiments, we often want to estimate causal effects, and to do so we try to make sure we eliminate backdoor paths.
Consider the example of a COVID vaccine trial.
We let

be the event that a trial participant obtained a vaccine, and

be the event that the participant was infected with COVID.
We want to figure out

.
However, there is a “backdoor path”.
You will not get the vaccine if you don’t participate in the trial (which we denote by

), but particpating in the trial could change your behavior and hence have a causal effect on

To fix this we can cut the backdoor path using a placebo: it cuts the backward path by removing the confounding variable of participation, since it ensure that (conditioning on

In general, how does conditioning on some variable

, but cuts any path that depends on

Suppose we have some treatment variable

that we don’t get to control (e.g. in a natural experiment). Let

, and we hope to estimate

which is known as the the treatment effect.
However, we worry that some underlying variable

(e.g. healthy lifestyle) can affect both

The propensity score, defined as

, allows us to calculate

. We claim that as long as

is a valid confounder (for which the formula (★) holds)

The proof is obtained by expanding out the claim, see below

Intuitively, knowing the probability that different groups of people get treatment allows us to make

and calculate the treatment effect.

are calculable, we only need to do a linear regression.

When we cannot observe the counfounding variable, we can still sometimes use instrumental variables to estimate a causal effect.

is the stuff we don’t observe. If

is some variable that satisfies

which is the ratio between two observable quantities.

We focus on fairness in classification problems, rather than fairness in learning generative models or representation (which also have their own issues, see in particular this paper by Bender, Gebru, McMillan-Major, and “Shmitchell”).

In the public image, AI has been perceived to be very successful for some tasks, and some people might hope that it is more “objective” or “impartial” than human decisions which are known to be fraught with bias). However, there are some works suggesting this might not be the case:

Drug use in Oakland: 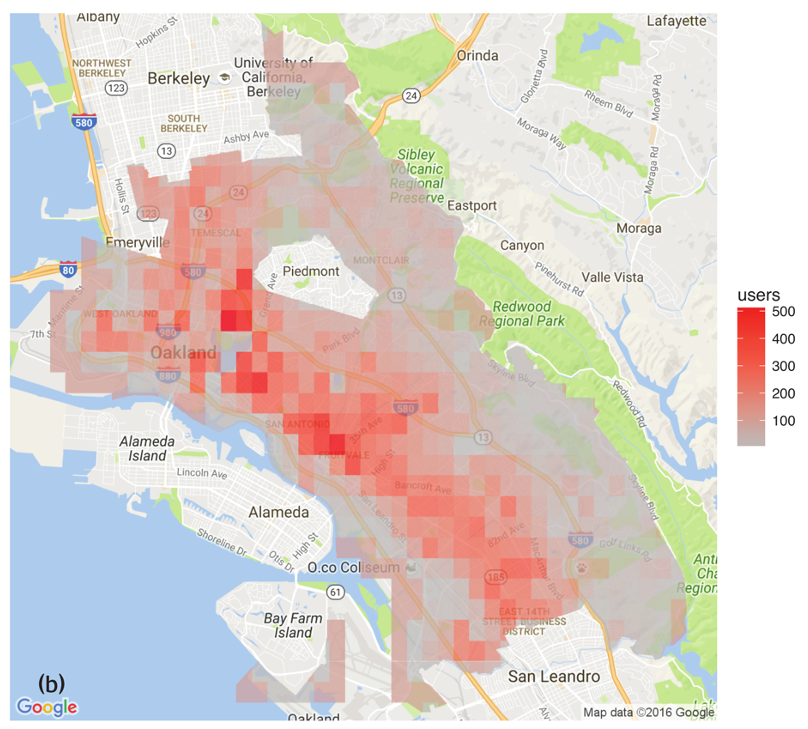 While algorithms can sometimes also help, the populations they help might not be distributed equally. For example, see this table from Gates, Perry and Zorn. A more accurate underwriting model (that can better predict the default probability) enables a lender to use a more agressive risk cut off and so end up lending to more people.

However, this is true within each subpopulation too, so it may be that if the model is less accurate in a certain subpopulation, then a profit-maximizing lender will unfairly offer fewer loans to this subpopulation.

In the case of employment discrimination in the U.S., we have the following components:

Algorithms for Fairness: an Example

To see why algorithms, which at first glance seem agnostic to group membership, may exhibit disparate treatment or impact, we consider the following Google visualization by Wattenberg, Viégas, and Hardt.

Suppose we are in charge of making a lending decision given the model prediction.
A scenario in which we give everyone a loan would be fair, but would be bad us —we would go bankrupt!

Profit when giving everyone a loan:

If we wanted to maximize profit, we would, however, give more loans to the orange population (since we’re more sure about which members of the orange population would actually pay back their loans) by setting a lower threshold (in terms of the score given by our algorithm) above which we give out loans.

This “profit maximization” is likely the end result of any sufficiently complex lending algorithm in the absence of a fairness intervention. Even if the algorithm does not explicitly rely on the group membership attribute, by simply optimizing it to maximize profit, it may well pick up on attributes that are correlated with group membership.

Suppose on the other hand that we wanted to mandate “equal treatment” in the sense of keeping the same thresholds for the blue and orange group. The result would be the following:

In this case, since the threshold are identical, the algorithm will be calibrated. 79% of the decisions we make will be the correct ones, for both the blue and orange population. So, from our point of view, the algorithm is fair and treats the blue and orange populations identically. However, from the point of view of the applicants, this is not the case. If you are a blue applicant that will pay your loan, you have 81% chance of getting a loan, but if you are an orange customer you only have 60% of getting it. This demonstrates that defining fairness is quite delicate. In particular the above “color blind” algorithm is still arguable unfair.

If we wanted to achieve demographic parity (both populations get same total number of loans) or equal opportunity (true positive rate same for both) then we can do so, but again using different thresholds for each group:

While the above was a hypothetical scenario, a real life example was shown by Hardt, Price and Srebro using credit (also known as FICO) scores, as described by the plot below:

Berkeley graduate admissions in 1973 had the following statistics:

This paradox is commonly referred to as Simpson’s Paradox.

A “fair” causal model for this scenario might be as follows:

In the above, perhaps gender has a causal impact on the choice of department to which the applicant applies. However, a fair application process would, conditional on the department, be independent of gender of the applicant.

However, not all models that follow this causal structure are necessarily fair. In the case Griggs v. Duke Power Co., 1971, the court ruled that decision-making under the following causal model was unfair:

While the model appears to be fair, since the job offer is conditionall independent of race, given the diploma, the court ruled that the job did not actually require a high school diploma. Hence, using the diploma as a factor in hiring decisions was really just a proxy for race, resulting in essentially purposeful unfair discrimination based on race. This creation of proxies is referred to as redlining.

We cannot come up with universal fairness criteria. The notion of fairness itself is based on assumptions about:

Fairness depends on what we choose to measure to observe, in both inputs and outputs, and how we choose to act upon them. In particular, we have the following causal structure, wherein measure inputs, decision-making, and measured outcomes all play a role in affecting the real-world and function together in a feedback cycle:

A more comprehensive illustration is given in this paper of Friedler, Scheidegger, and Venkatasubramanian: