Alexander (Sasha) Rush is a professor at Cornell working in in Deep Learning / NLP. He applies machine learning to problems of text generation, summarizing long documents, and interactions between character and word-based models. Sasha is previously at Harvard, where he taught an awesome NLP class, and we are excited to have him as our guest! (Note: some of the figures in this lecture are taken from other papers or presentations.)

Textual data has many different challenges that differ from computer vision (CV), since it is a human phenomenon. There are methods that work in computer vision / other ML models that just don’t work for NLP (e.g. GANs). As effective methods were found for computer vision around 2009-2014, we thought that these methods would also work well for NLP. While this was sometimes the case, it has not been true in general.

What are the difficulties of working with natural language? Language works at different scales:

Here are examples of structure at each level:

There are many different NLP tasks such as sentiment analysis, question answering, named entity recognition, and translation. However, recent research shows that these tasks are often related to language modeling.

Language modeling, as explained in Shannon 1948, aims to answer the following question: Think of language as a stochastic process producing symbols. Given the last

symbols, can we predict the next one?

This question is challenging as is. Consider the following example:

There are many options: marble/desk/stone/engraving/etc., and it is already difficult to give a probability here. In general, language is hard to model because the next word can be connected to words from a long time ago.

Shannon proposes variants of Markov models to perform this prediction, based on the last couple characters or the context in general.

Since local context matters most, we assume that only the

most recent words matter. Then, we get the model

As we have seen in the generative models lecture, we can use cross entropy as a loss function for density estimation models. Given model density distribution

, the cross entropy (which equals negative expected log-likelihood) is defined as follows:

In NLP we tend to use the metric “perplexity”, which is the exponentiated negative cross entropy:

This corresponds to the equivalent vocabulary size of a uniformly distributed model. Lower perplexity means our model was closer to the underlying text distribution. As an example, the perplexity of the perfect dice-roll model would be 6.

Why do we care about perplexity anyway?

A few years ago, the best perplexity on WSJ text was 150. Nowadays, it is about 20! To understand how we got here, we look at modern language modeling.

Predicting the next word

We start with the model

(The softmax function maps a vector

into the probability distribution

. Note that this is a Boltzman distribution of the type we saw in the statistical physics and variational algorithms lecture)

is some neural basis (e.g.

, and W is the final layer). However, this means to use softmax to predict requires computing softmax over every word in your vocabulary (tens or hundreds of thousands). This was often infeasible until GPU computing became available.

Byte-pair encoding offers a bridge between character and word models. This greedily builds up new tokens as repetitive patterns are found in the original text.

In the last decade NLP has seen a few dominant architectures, all using SGD but with varying bases. First, we must cast the words as one-hot vectors, then embed them into vector space:

is the one-hot encoded vector and

is the learned embedding transformation.

is some convolutional filter and

is the activation function. This has the benefit of learning fast. The matrices it learns also transfer well.

As an example, GloVe is a NNLM-inspired model. It stores the words in 300-dimensional space. When we project the some words to 2-dimensions using PCA, we find semantic information in the language model.

Previous information is ‘summarized’ in the

on the right, so this model uses finite memory. Below is an illustration of the recurrent neural network.

Since the recurrent model uses the full context, it is a more plausible model for how we really process language. Furthermore, the introduction of RNN saw drastically improved performance. In the graph below, the items in the chart are performances from previous NNLMs. The recurrent network performance is “off the chart”.

To understand modern NLP we must look at attention. For a set of vectors

, we define attention as

can be considered a probability density of the model’s ‘memory’ of the sequence. The model decides which words are important by combining

The attentional model can be fully autoregressive (use all previously seen words), and the query

can be learned or be specific to an input. In general, we have:

Since we condense all previous information into the attention mechanism, it is simpler to backpropagate.
In particular attention enables looking at information from a large context without paying for this in the depth of the network and hence in the depth of back-propagation you need to cover. (Boaz’s note: With my crypto background, attention reminds me of the design of block ciphers, which use linear operations to mix between far away parts of the inputs, and then apply non-liearity locally to each small parts.)

. Notice that if we choose many different periods, then the cosine ways will almost never meet at the same point. As a result, only recent points will have high dot products between the different cosine values.

projections for each query/key (generally between 8 and 32) then do softmax across these projections:

These heads can be computed in parallel and can be implemented with batch matrix multiplication. As a result, transformers can be massively scaled and are extremely efficient in modern hardware. This has led these models to be very dominant in the field. Here are some example models:

In recent years we have had larger and larger models, from GPT1’s 110 million to GPT3’s 175 billion.

On these massive scales, scaling has become a very interesting issue: how do we process more samples? How do we run distributed computation? How much autoregressive input should each model looks at? (Boaz’s note: To get a sense of how big these models are, GPT-3 was trained on about 1000B tokens. The total number of people that ever lived is about 100B, and only about half since the invention of the printing press, so this is arguably a non-negligible fraction of all text produced in human history.)

For a model like BERT, most of the cost still comes from feed-forward network — mostly matrix multiplications. These are tasks we are familiar with and can scale up.

One question is to have long-range attentional lookup, which is important for language modeling. For now, models often look at most 512 words back. Can we do longer range lookups? One approach to this is kernel feature attention.

Recall that we have

. Can we approximate this with some kernel

? The main approach is that

, which we approximate with the kernel

. There is a rich literature on approximating

. Then, we can try to approximate

Practically, transformers do well but are slower. For longer texts, we have faster models that do slightly worse. A recent model called performer is such an example. 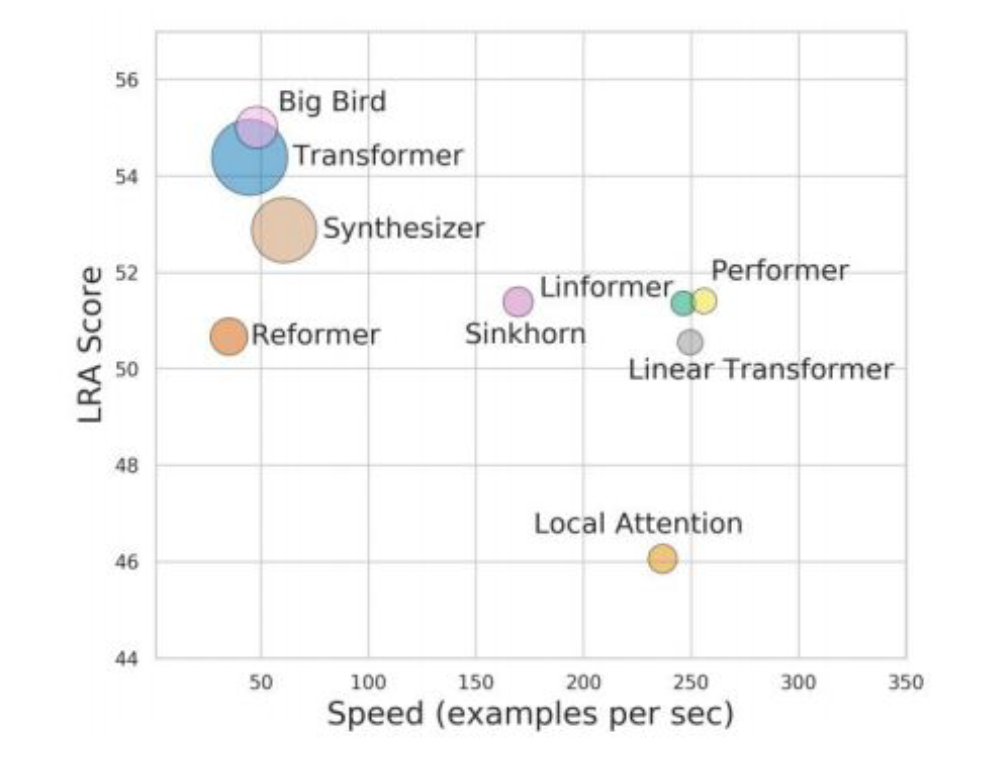 Ultimately, we want to make models run on “non Google scale” hardware once it has been trained to a specific task. This can often require scaling down.

We are also in a space race to produce efficient models with more parameters, given how much scaling has been effective.

The paper Which BERT classifies modern questions in NLP into the following categories:

We have many questions asked during and after lecture. Here are some of the questions.